First introduced in the 1950’s  this guitar came with a much shorter scale (22.5″) aimed perhaps at the younger player or people with smaller hands.  The body style, known as “Fender Offset” is similar to the Mustang.  Over the years having been through many modifications and reissues, the latest version (late 2016) which I saw at the Guitar Show in Brum has a 24″ scale as opposed to Fender’s usual 25.5″ and a Strat type “Hard Tail” bridge. 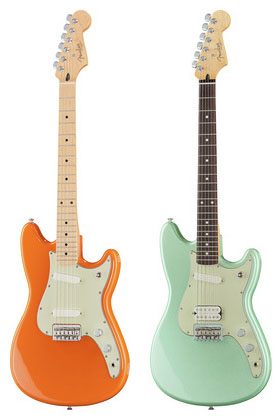 The two models are shown above the main differences being that the HS RW SG has a Hum-bucking pickup at the bridge, which has a coil tap option, and a rosewood fret board.  Both are  MIM and retail in the UK at around £460