Wow, another anniversary model.  Pete Townshend started using the SG model when it became too expensive to smash up the semi acoustics that he was playing.  At least the SG could be repaired a little easier.

The P90 pickups are wound with more turns than Fender single coils which makes them a bit meatier but produces more hum, hence the development of the Humbucker.  These days it isn’t such a problem.

Yet more Anniversary Models from Fender 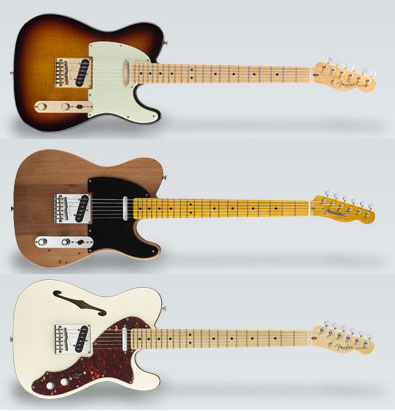 The Telecaster has been around for a while and now with yet another limited edition launched you may feel spoiled for choice.

From the top they are:

Advertised at around £1400 with 50 of each coming to Europe.  What do you think?

The Midtown Standard with Bigsby® has a solid mahogany body a solid maple top with f-holes is glued on and comes ins Faded Red, as shown,  or Ebony Black.

A solid mahogany neck is carved to  ’60s-style profile that measures .800″ at the 1st fret and .875″ at the 12th, and has a bound rosewood fingerboard with 22 medium-jumbo frets and nice reflective dot inlays.

This Duane Eddy signature model is based on a ’57  “Chet Atkins” style G6120 that he used on some of his  string of late 1950s and early ’60s instrumental hits.

To give the axe it’s full title it is the “Gretsch G6120DE Duane Eddy Signature model hollow body guitar”  Like me he is still around despite the rock and roll lifestyle.

This new offering from Gibson is a long-scale, drop-tuned instrument with a 28″ scale length that is suitable for lower tuning.

It comes with a maple top and weight-relieved mahogany body.  The mahogany neck has the ’50s profile with a rosewood fingerboard that has 22 medium-jumbo frets and a 12-inch radius with a 1 11/16″ nut width.

I have yet to try this guitar but my immediate thoughts are around balance and weight for playability and how much use I would get out of it to make it worth forking out over £1000.

The Pawn Shop Series instruments are all-new Fender guitars with a mixture of diverse Fender components.  Fender call them “guitars that never were but should have been.”

This is the Fender ’51.  It has a Stratocaster® body and a “C”-shaped Telecaster® neck.  Pups are a Texas Special™ neck pickup, and a Fender Enforcer™ humbucking bridge pickup.

Here we have the Fender ’72.  It has a semi-hollow Stratocaster® body with f hole and a Telecaster® neck with a Enforcer™ humbucking bridge pickup and a standard Wide Range humbucking neck pickup.

Not content with adding a Bigsby to a LP standard, Gibson announce the Les Paul Axcess which is marketed as the Alex Lifeson (of Rush) model.

This hybrid has two high-output humbucking pickups with series/parallel wiring options via its push-pull volume controls, and a Floyd Rose® licensed unit that is not only vibrato system but also loaded with GraphTech™ Ghost® piezo bridge saddles.

You can route it all through a traditional mono jack (labeled “Regular”) using a single guitar cable, or use two cables to split your acoustic sounds into a separate output path using the “Regular” and the “Life-O-Sound” output jacks together.

While the Floyd Rose®  looks a little better than the Bigsby VS I have not been a huge fan of them in the past.  Perhaps Gibson have made some improvements to this  “licensed” version and at an advertised price of around £2,699 one would hope so.  The electronics are interesting but it is doubtful that they are much different to those found on other guitars with split coils.  The addition of the GraphTech™ Ghost® piezo seems to be at odds with the high output humbuckers.  Anyway I would like to try one.

This guitar has a the classic Ebony Black nitrocellulose finish, a carved maple top giving the usual clarity and sustain, with a mahogany body to add depth and richness to the tone.  In fact it has all of the things we love about LP Standard, plus a Bigsby unit.  However, somehow it just doesn’t look right.

The Les Paul Junior DC Bass has a solid mahogany body with glued-in mahogany neck for outstanding resonance, depth and sustain, and plenty of tonal sweetness with impressive punching power.

The neck measures 1.60″ wide at the nut, with a depth of .850″ at the 1st fret and .900″ at the 12th, dimensions that yield outstanding speed without cramping your style in the least. The grade-A rosewood fingerboard carries 20 medium-jumbo frets, with good access right up toward the top thanks to the double-cutaway body design.

Anchored by Gibson’s unique and highly adjustable three-point bass bridge set deep into the meat of the body, and a set of efficient Grover™ shamrock-key tuners at the other.

Commemorates the Nashville factory which was flooded in May 2010